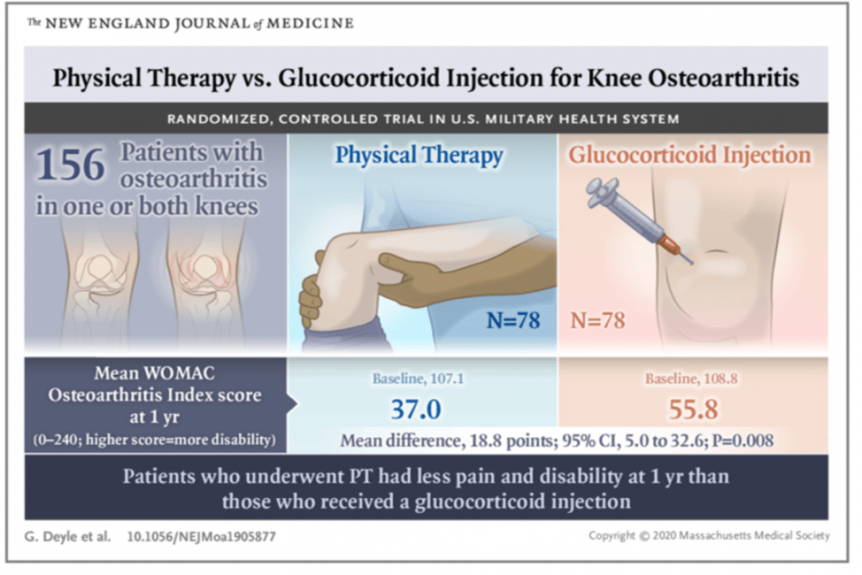 Shots Are Common – But Should They Be?

If you have knee OA in the US, you have about 50% chance of getting an injection.1  Despite exercise being the most recommended treatment for knee OA, only about 10% of people ever get referred to a physical therapist.  In fact, the use of PT declined between 2007 and 2015.2

In my clinical practice, I hear people all the time ask, “How can PT help me?  My knee is ‘bone on bone.’”  Patients tell me about how they came in under the recommendation of a neighbor, but their doctor didn’t actually make any referral to PT, instead saying, “Come back when you’re ready for surgery.”

Well, if you or someone you know has knee OA, you might be interested to hear about a new study published in the New England Journal of Medicine, one of the most prestigious medical journals in the world.

In the study, published by Deyle and colleagues, 156 participants with knee OA were enrolled.  Half of those received an injection and half received physical therapy.  Average age of the participants was 56.1 years.  They followed up at 1 month, 2 months, 6 months, and 1 year.

Even in the short-term, it appeared that physical therapy was superior than an injection. But, after 1 year it was clear that both pain and function were better in the physical therapy group.  Along with the data published in a previous blog post showing over 50% of people with knee OA can delay surgery for 7 years, this data calls into question the warning that your knee OA will always get worse with time.

Interestingly, 14% of the people in the physical therapy group reported no or minimal improvement, while 33% of people in the injection group did.  This study is one in a growing body of research supporting more people undergoing physical therapy for knee OA, particularly if the knee OA is mild or moderate, instead of having surgery or injections.

If you have any questions about your knee pain in particular, reach out to us through a form below or click on the “contact us” button on the top right hand side of the screen.