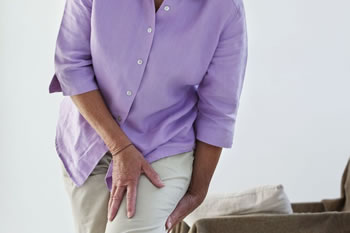 If you’ve ever had sharp pain in the side of your hip upon taking a step, it’s possible that you’ve been told you had hip bursitis. But let’s get one thing straight: “hip bursitis” is an old-fashioned name. The condition is now being called “gluteal tendinopathy” or “greater trochanteric pain syndrome.” These newer names emphasize that the bursa isn’t the only problem.  This name change happened because scientists began to notice people with “bursitis” also usually had irritation or tearing of another nearby structure—the gluteal tendon. 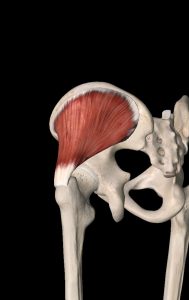 Gluteal tendinopathy is one of the most common problems in the country.  A simple google search putting the estimate at 200,000 cases a year. For years in physical therapy, we have noticed that patients with this condition usually have hip weakness. When patients are given specific exercises to improve that weakness, almost all of them get much better. However, we hadn’t had much research on these exercises, so we couldn’t really say whether they were really as helpful as we thought…until now.

Earlier this year, a group of researchers published the results of the first study to compare exercise and education to cortisone injection and to doing nothing (Mellor et al, 2018). The exercise program focused on strengthening the gluteal tendon, something that has shown to be beneficial in other tendon issues. 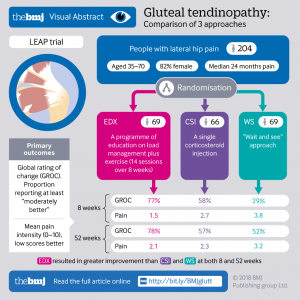 Why Did Cortisone Injections Fare so Poorly?

Unfortunately, it’s not uncommon to see patients in the clinic who are getting routine cortisone injections every 3 months. These patients usually don’t have a plan to begin strengthening of the tendon through exercise. The result is a tendon problem that keeps coming back every 2-3 months like clockwork. I’ve even seen patients who’ve had over 20 injections, and a few where eventually the tendon is weakened to the point that it tears and they then undergo surgery.

How You Can Perform the Exercises in the Study

If you have been diagnosed with hip bursitis, it may make sense to begin a specific exercise program to build up the gluteal tendon. The exercises performed in the study weren’t just any exercises, but a program of specific exercises for the hip that gradually increased stress on the tendon over time. This gradual increase of stress allowed the tendon to heal and become stronger, thereby tolerating the loads that it could not initially tolerate, and preventing a recurrence of hip pain. Think of this increase of stress similar to how someone might exercise in the gym in order to build their strength.

Interested in some of the exercises performed in this study?

Check out this link to our YouTube video, where you can see some of them in action!